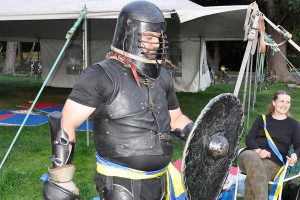 The first time, Blake showed up (it was a uncommon warm Wednesday evening at our training site, the HTC place), we were enthusiastic und had high expectations it the skills of a veteran from the Kingdom of the West, so we put him into our most comfortable loaner gear. He surely excelled our highest expectations. 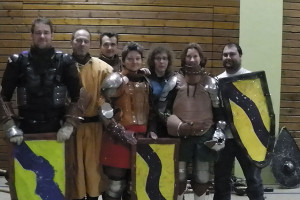 For our lonesome and isolated Shire at the far eastern appendix of Drachenwald this import of knowledge and style became a rich source of inspiration at the right time. The Shire was at war with the powerful barony of Knights Crossing. We had to expect an invasion of the king´s finest fighters and were in desperate need for support. 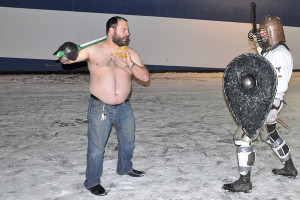 The Holy Excel Sheet records for Blake 22 acknowledged fighter´s practises between 23th of July 2014 and 22nd of May 2015, in many of them he coached us. He attended trainings, whenever his obligations (work, women, whiskey) allowed it. Astonishing was his spleen to train in the same conditions as he was used from California. At least he agreed, that only bananas deliver the necessary energy for keeping the body warm. 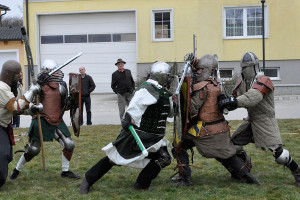 Blake turned out to be a human battering ram, a cannonball disguised with a beard. His skills, developed in years of his national sport American Football, opened for us a complete new approach to melee scenarios (the Austrian national sport, as everybody knows, is chess, mainly played in smoked separees in coffee houses). It was honour (and great fun) for us to have Blake in the colours of Ad Flumen Caerulum at Parasol War and leading us to victory in the bridge battle scenario against an army of Drachenwald lead by the king himself. 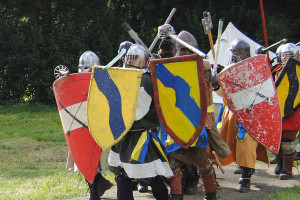 In exchange for sharing his wisdom with us we tried to give him lessons about the fine nuances of Austrian humour. He will have to tell many things to the ethnologists back home at Berkley University. 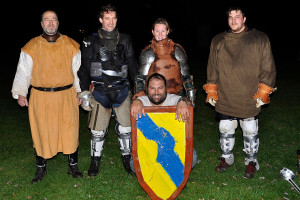 We have to mention also his efforts in Arts&Science- a nearly hopeless enterprise to teach sewing to some barbarians, who just have started to use knife and fork. At least he gave us  an ideal for a true member of the SCA: hospitable, open-minded und willing to travel long distances. 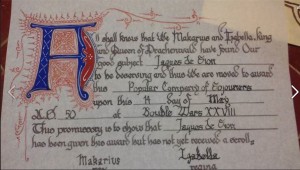 It was more than overdue, that King&Queen of Drachenwald awarded his efforts with an AoA at Double Wars and we congratulate. So we ´ve got a Blake and send Jaques de Sion back to the Kingdom of the West. It´s hard to say goodbye. We wish him all the best. 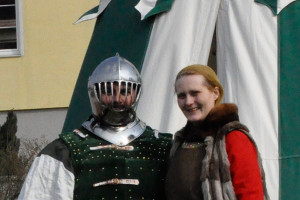 P.S.: Always keep in mind: the groin is a regular target area.