Thanks to an ambitous event crew and lovely guests from all corners of Draachenwald we could enjoy a wonderful event at our humble Shire of Ad Flumen Caerulum. The pittoresque site of the castle of Albrechtsberg was once more the stage for al lovely community. Arts and Science, Bows and Arrows, court and itchen and of course much heavy fighting scenarios made it an unforgettable meeting of friends of our great Society of Anachronism. Find here some pictures. 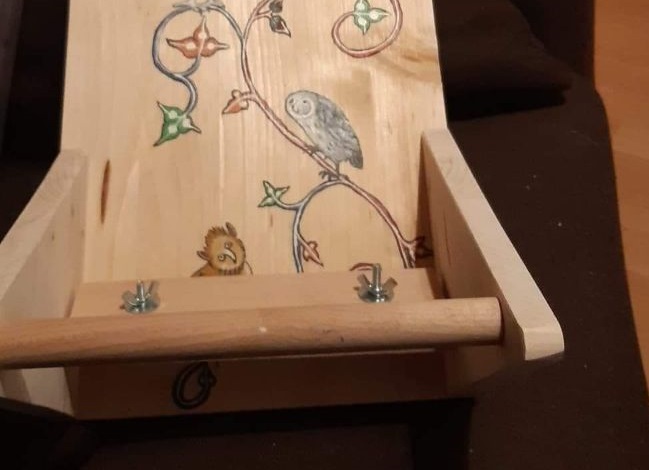 Torn seams on shoes or clothes? Ripped out eyelets or rivets on tents or armour? Straps need replacing? This is the time to finally do it!

Ad Flumen Caerulum is starting a series of A&S challenges this winter! The first one, which runs all the way through November, is to “repair your stuff”.

Go through your wardrobe or equipment before putting it away for the cold season and pick up some mending. Post your results to the challenge thread in Ad Flumen’s facebook group and earn a bead on a string as a reward for beating seasonal sloth!#AdFlumenChallenge

The year is ending and with it the time for last year’s New Years’ resolutions. How many projects do you have that you wanted to finish this year? How many inside seams not felled, hems not done, buttonholes still to sew?
Pick up one of your unfinished projects and bring it to an end for our December challenge.
Post your results to Ad Flumen’s facebook group and earn a bead on a string as a reward for beating seasonal sloth!#AdFlumenChallenge

First of all – what is a Peerage in the SCA?

Design choice – What am I comfortable with?

I was told in January 2020 that Anna Syveken would be raised to the Order of the Pelican. To my initial shock, I was asked to do her peerage scroll for Spring Crown. This is when the planning began.

The inspiration here is the Gorleston Psalter (http://www.bl.uk/manuscripts/FullDisplay.aspx…) which has some key decorative elements. All decorative borders are linked by continuous vines that tie into knotwork, frames and so on. It leaves plenty of opportunity for personalisation in the form of marginalia, medallions and whitework. For more information on the Psalter, you can read this thread >> here.

I chose this style because I am rather familiar with it and lots of people wanted to contribute. The various components made this possible. So in January of 2020 we discussed what path to take in a select group of people.

Wording – The first step in making it personal

Perdita von Bremen was approached to do the wording. She wrote the very nice originally modern German version which I then translated into Middle High German. I used Vienna’s first city law (https://www.monasterium.net/…/22(Privil_Nr_2)/charter) as a basis, with additions from Lexer’s Mittelhochdeutsches Wörterbuch (https://woerterbuchnetz.de/?sigle=Lexer#0). To make it sound more period, I introduced “doubling” of terms (such as “share and distribute” – “teilen und zerbreiten”). In addition, I researched old terms for dates until I arrived at “the evening before bluomostertag”. The evening before Palm Sunday was the date Spring Crown 2020 and the elevation were originally planned for. Anna asked how much time I spent on it, I’d estimate a total of five hours for that alone.

The next step was to design the overall layout. Gorleston, of course, does not have double pages with a divider down the middle like this scroll. In a book, each page would have its own frame. I tied them together because the scroll doesn’t have a fold down the middle.

Naturally, the center images are the award granted and Anna’s badge which she prefers to her arms.

The corners were distributed among the ladies who wanted to contribute (Ellisa von Berenklaw, Katherina Mornewegh, Baroness Nordmark) with a discussion of general ideas. What did Anna like? What could I include? How could I play to her mundane interests? Her elevation wishlist mentioned some old sci-fi references as options for her scroll, so we assigned sci-fi movies and series to the corners.

Since we already had a number of modern items in the scroll, we went looking for more ideas. The references to Anna’s life range from logos for plays and musicals she has appeared in, her musicality in general, drinks, embroidery patterns, a favourite garb item and many more. The plague also received notice in the form of the little corona virus and the figure wearing a mask in the medallion next to it.

Writing and more planning – and a big emotional hole

My own next step was to outline the frames and then write the scroll text. This of course takes more than one attempt until nip and size are perfect and the text is distributed correctly. I don’t line my paper (in this case Pergamenata) but rather write on my illuminated tracing board. That happened in February of 2020 with the original date and time planned for the elevation. Another 5 hours or so.

The result I then copied a number of times and doodled in the margins. How would the planned corners tie together? What could I do inside the big initial? Which decorations would be whitework, what would be done in colour? The initial design was then traced onto the written scroll with very fine sepia marker. I use this because any colour gouache will later cover the lines.

And that was when the plague hit and we had to cancel Spring Crown. Cue the emotional hole that led me to put aside the scroll for over a year.

In the intervening year+ I occasionally added to my scribbled notes of ideas for marginalia. I also practiced sewing perg together with what was originally intended as interlaced herringbone stitch. Later, I decided against the interlacing because it put wear on the holes from repeated tugging. It was also a bit too much visually.

When Anna finally found an event we could plan for, I was faced with the biggest decision: Should I write a new scroll with the correct data or keep the original one and modify it somehow? It was already so full of weird and personal items I decided to keep it. (Ok, let’s be honest, I was also proud of my calligraphy on the original and terribly out of practice). Just like the medallions, I would sew the new information onto it instead. The new date is also religious in format. The day of the elevation was that dedicated to Cologne’s St. Severin so this is what I chose.

Next, I had to figure out the colouring. I did that in one of my copies and ran into some trouble because of the complexity of the margins. So I added the very rare rose ocher background tone to the usual blue, red, ocher and gilt. Gorleston doesn’t use more colours than those in the backgrounds. It adds green and orange for foliage and a variety of colours for marginalia, however.

Then came the gilding – sugar/gum arabic/pigment/water as gesso, let that dry for 48 hours, then gild with transfer gold leaf and polish.

The image here shows the scroll drying after the base for the gilding is applied. The gesso is pigmented in red for two reasons. For one thing, it helps me place the gesso precisely inside the lines, for another, the red pigment prevents the gold getting a greenish tinge afterwards. You can see that designs are still sketchy in the bottom half while the top is already developed in a lot of detail.

More information on gilding can be found >> here.

This is when the scroll entered the “ugly duckling phase”. There is no time in the entire process when it looks more awful – patchy and like the artwork of a primary schooler.

Painting and outlining in black came next (Reeves gouache with a horrible white replacement from Royal Talens that needed repeated tracing on the whitework and will be thrown out as soon as I get a better white).

The images here show the scroll in these two stages – the first one is my ugly duckling, in the second you can see it with the outlining done but without most of the whitework. The pelican has also not been painted yet, I wanted to do that in daylight because of the shading.

Sewing – yes, I know this isn’t something you’d expect in a scroll

While doing the whitework (my hands were shaking, so I needed the breaks) I sewed on the (pre-punched) medallions with linen thread. The top right one was gilded in shell gold by Mistress Ellisa von Berenklaw, which to my horror broke off during the process (after a year of waiting to be used, the colour was quite fragile because it had gone through more than a circle of seasons before being handled) and had to be glued back on with gesso.

In this image, I am working on the one by Katherina Mornewegh which you can find in more detail in the gallery below. You can also see the replacement date and time sewn over the original segment in the scroll.

The last step was to finish the whitework which incorporates a lot of designs that refer to things and events in Anna’s life as well as to clean up sloppy outlines.

I have no idea how many hours the scroll took in total, but it was easily 30. Is everything perfect here? No, of course not. There are a lot of things where I know I can do better, but it is the first scroll I touched after the plague and I am content with how it turned out in the end. 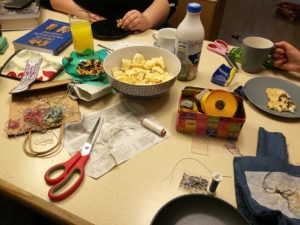 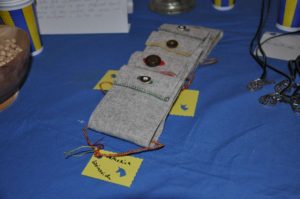