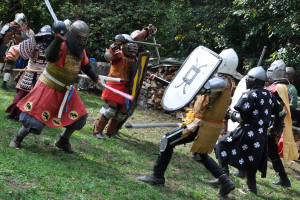 The story of Parasol War is a history of misunderstandings. Two years ago (rumor has it, that there were some fawning courtiers and corrupt advisors) the peaceful barony of Knight´s Crossing made war against their small neighbour, the Shire of Ad Flumen Caerulum. The cause was a sunshade, built by the finest artisans of Frankmarkt. After exhausting fights, the army of Knight´s Crossing achieved a victory. But an evil villain took the sunshade by night and hid it well in a castle far away. So an united party of Knight´s Crossing and Ad Flumen Caerulum went on a quest for recapturing the sunshade at Parasol War II. 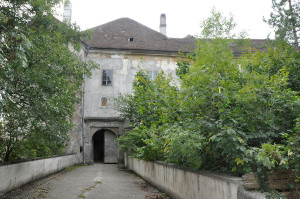 Scenery of Parasol War II was the lovely castle of Albrechtsberg in Lower Austria, near the river Danube and not far away from the monastery of Melk, one of Europe´s most famous baroque buildings. Ad Flumen Caerulum had the honour to host Their Royal Majesties at this galant quest. 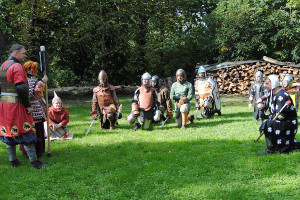 Two mixed parties fought for the Parasol (“Sunshade”): the victor of the first tourney, Lord Ian Oliver, chose the side of the attackers, while Lord Flose Thordson led the defending party at the gates of Albrechtsberg. Archers and fencers, marshalled by Baron Konrad of Lewenstein, took also part in this battle.

The decision over victory and defeat was a close thing, but the Sunshade was defended successfully and therefore remains in Albrechtsberg until the next attempt at Parasol War III (Spring 2016, tbd). 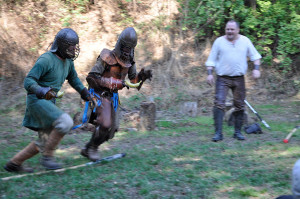 SCA wars do not know any losers. We don´t fight against each other, we are playing together, regardless for which side. Mixed groups and various scenarios, for example the so called “Run for the Sunshade Parts” are not designed for competition, but for fun. 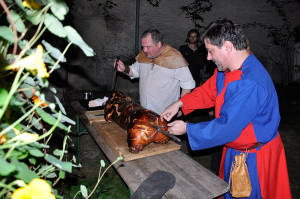 An ambitious kitchen team, an impressive site with an unbeatable hospitabel castle owner  and  thanks to our fine and enthusiastic guests made this event unforgettable. 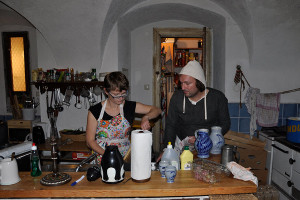 Besides that, the Shire congratulates following gmembers for their awards, given by Their Royal Majesties Thorvaldr and Tomoe: Sister Ute of Xanten and Alienor de Salignac for the Award of Arms and Lord Flose Thordson for the Order of the Silver Guard. Vivant! 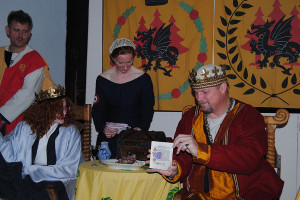